How to Prevent ACDSeePro Commander 8 from Launching

One problem I have noticed with the new Windows version of ACDSee Pro 8, is that a program launcher has been added that runs continuously in the background and appears in the Windows taskbar.

That's not such a big deal if you LIKE continuously running launcher programs that load every time you run ACDSee, that you have no control over, and can't be terminated outside of the task manager.  Personally I DON'T like that sort of thing and I don't understand why ACDSee doesn't give us the opportunity to prevent us from loading it in the first place.

I can't believe this lack of user control was anything but an oversight that will eventually get fixed, but in the meantime, I've documented the steps to "fix" it from your end. 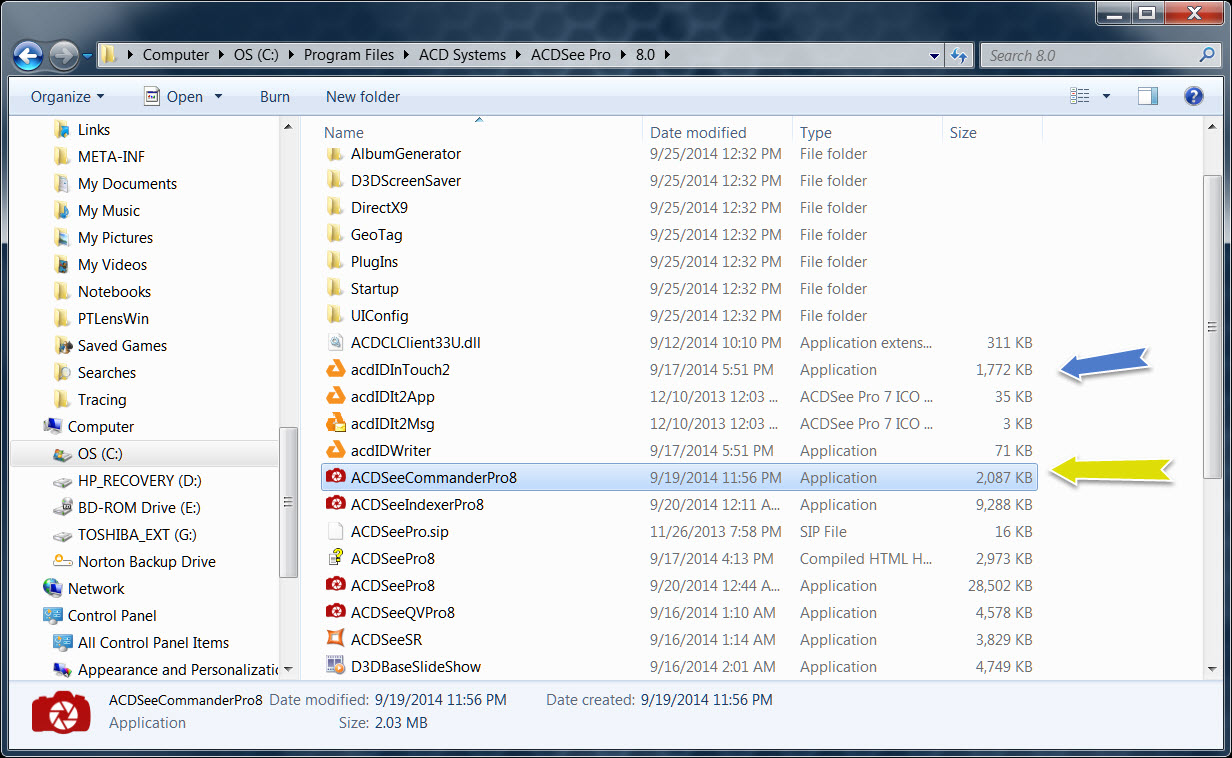 I have learned that by renaming ACDSeeProCommander8.exe file you can prevent it from loading at all with no apparent issues in running ACDSee Pro 8.  Here is how to do it:

BEFORE you do this renaming task, some advice: When I rename a file like this, I keep the name the same except for adding a "z-" in front of the name.  That way it is easy to find and to know the exact original name of the file.  Also adding a 'z-' to the front means that it will sort to the bottom of the file list if you sort by name.  Also very convenient for finding a renamed file.

Also note the BLUE arrow pointing to the acdIDInTouch2 application.  This file appears to control any communications between your PC and the ACDSee company.  I have renamed it as well with ALMOST no negative effects to ACDSee Pro 8 (so far, as I write this it's only been out 1 day!).

With "inTouch" disabled, I was still able to upload a photo to Flickr, but I was not able to check to see if updates were available.  It may, or may not, affect one's ability to interface with the ACDSee 365 online drive service.  I don't subscribe to ACDSee 365, so I don't have a way to test that.  Technically, this straddles the line as to whether or not this cripples ACDSee Pro 8.  I personally am inclined to keep it as a functioning portion of ACDSee pro.

Even though "InTouch" runs in the background continuously, it doesn't really seem to slow my system down any.  So I don't know if it is worth renaming or not.  To my knowledge ACDSee hasn't had a history of abusing this privilege that you, as a user, grant them.  So - no performance hit and no history of abuse tells me that the 'InTouch" program is not an issue for me. YMMV.

If I were asked by some bigwig from ACDSee why I would want to rename the Commander pro 8 application so it can't be loaded, I would say its use should be optional, it's just a loader, after all, and it adds no value to the ACDSee Pro user experience in my mind.  And once it is loaded, I for sure, should be able to exit out of the thing WITHOUT having to resort to the Windows Task Manager. In my mind, in it's current form, it's a dumb nuisance app that won't win ACDSee any friends.