Can a Tablet Replace a PC for Photography? 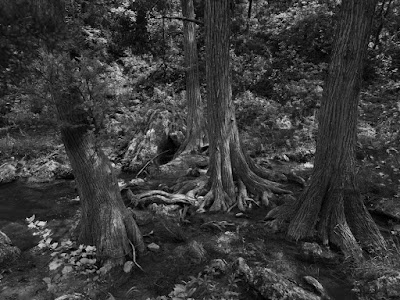 Lately, I've had to travel a bit to Texas from Illinois, in the USA, for family reasons.  And it has occurred to me that while a Desktop PC is a wonderful tool for processing and presenting photos, it makes for a terrible travel companion.

Laptops have been the traditional substitute for travelling photographers, but they have problems of their own.  The ones good enough for photography, are heavy, HEAVY! If you've ever had to run from one terminal at O'Hare airport in Chicago to a distant terminal in 15 minutes, you will know exactly what I mean.  I won't even discuss the problems of short battery life and screen calibration.

The funny thing is, I really don't need all that laptop processing power when I travel.  I rarely have time to do any sort of editing of my photos during that time anyway. I'm lucky to have the time to save the contents of my media card and cull the terminally bad photos.  I might do a quick edit and share of a photo with family, but my REAL processing still waits until I get home to my digital darkroom set up.  What I need is a sort of coordinating software/hardware hub for my travel photography.

So it has occurred to me, along with millions of others, that a cheap Android tablet, while not a perfect travel companion, might be at least as good, if not better, than a heavy laptop with its OWN set of travel problems.  However, whenever I see this issue brought up on various photography websites, the general consensus is that this is a bad idea.  The tablets are underpowered, the memory anemic, and the upload to online storage is abysmally slow.

I have felt great frustration at this information.  I hate travelling with laptops, but I didn't see a viable alternative.  Then one day I realized that I was accepting this general consensus without doing any investigation of my own.  I had become sheeple!  I hate being sheeple.

So I set out to see if I could get away with using an Android tablet as my photo hub.

I own a very generic, first generation Lenovo Idea Tab A10 - 70 with 16 Gig of memory and a micro SD expansion slot along with MediaTek MTK 8121 1.3 GHz quad-core processor.  It  has a 10 inch screen, and uses Android 4.2 (Jelly Bean) OS.  It supports OTG USB accessories (pretty common, anymore); and I hasten to add that this is not the upscale Lenovo Yoga tablet.  This is a very common, mid tier, name brand, generic tablet.  I paid about $180 USD for it, and a matching USB keyboard that doubles as a cover for travel.

The first thing I looked for was software.  I discovered there was a lot of what I call "toy" photo apps.  Things that allow adolescents to add 'cool' filters to photos taken with smartphones, but not much for the serious photographer using a tablet  I did find two titles. Lightroom, and Photo Mate R3 that looked interesting to me.

Lightroom had the advantage of being free, but it did require that I convert my raw photos to dng, which would be a significant alteration to my digital darkroom practices when I got home.  I don't really WANT the dng file format as I like how my orf files are handled by ACDSee on the PC.  And while Lr doesn't really REQUIRE you to subscribe to the Adobe online environment, it's effectiveness is really enhanced by that subscription, and I wanted to use either my grandfathered in "50 gig free for life" subscription to Box.com or my other paid for, Amazon photos subscription.

Photo Mate cost $10, but it did not require a conversion to dng, and it allowed me to upload files anywhere I wanted.  Plus it offered a remarkably complete editing environment, including layers.  I thought the cost was acceptably low especially when compared to what I paid for PC based photo tools.  So I bought it and I don't regret buying it.

Photo Mate is not perfect however, Using it to edit photos on a 10 inch touch screen is kind of difficult.  My fat sausage fingers did not offer the sort of fine control that a mouse can offer. (more on this in a bit).  Also there is a bit of a lag between the change in a control  and the time it takes to display that change.  Clearly, a faster processor and higher spec'ed tablet would make it run faster.  I think it is obvious that PhotoMate is held back by the technology currently found in low to mid level tablets.

Fortunately, my editing needs on Android are pretty simple, so the auto enhance feature is really all I need to edit a photo to a point suitable for sharing it with family. I find the lag acceptable in this case.

Also, while Photo Mate does an excellent job of managing a single photo, it's rather weak when managing a batch of photos.  I tend to use the Box.com android client app to transfer photos to Box. it's better and faster, but I DO wish Photo Mate could do that for me!

Could I have used something OTHER than Photo Mate for my limited editing needs?  Probably, but it offers an almost unlimited editing and raw development pallette.  For just $10 I know I can handle just about anything fate tosses my way when I travel.

I have also found that the Lenovo File browser useful at times for batch file manipulation.  There are several file manager apps available in the Google Play Store if your tablet doesn't come with a native file manager, or if you don't like your existing manager. 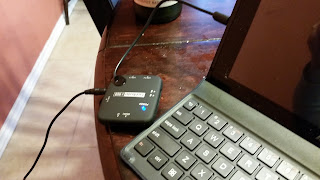 Once I had my software selected, I needed to figure out how to get my photos from my camera to my tablet.  My Tablet doesn't have an SD card slot (though it does have a micro SD slot), so I can't just move the media card from my camera to my tablet.  My camera (Olympus E-M10) can upload jpgs to my smartphone via the Olympus Image Share app on my phone.  But I want to shoot raw, and OIS is kind of slow anyway,  I needed a better way to get my photos directly into my tablet.

After some research and some kind advice from others, I knew that an OTG USB hub was the way to go. basically it allows one to connect what appears to be a combination of USB hub and media card reader to the tablet via the mini USB port most Android tablets use to charge the battery.

I bought one from Amazon.com.  It's a no name generic, I THINK.  The brand might be Costech, but I'm willing to bet the thing sells under a variety of vendors at a variety of prices.  I believe I paid around $12 USD for it.

This is an interesting device in that you can connect a conventional USB Mouse and Keyboard to the tablet via the hub. I admit, I haven't tried a USB mouse with this, even though it might make editing photos with Photo Mate easier.  I have been reluctant to use such a mouse because of power draining issues with the hub.  I've seen bluetooth mice advertised, and I'm thinking that might be more useful to me overall for editing than a hub based solution.

When you use this hub, you need to make sure the tablet's battery is fully charged since it uses the mini USB port for access eliminating your ability to power the tablet while in use.  There is a USB power cable that comes with the hub, but it seems to power only the hub itself preventing the tablet from having to power the hub.  When connected, the tablet doesn't indicate it is receiving power by displaying the charging symbol.  Fortunately, you only need to have the hub connected for the transfer of files, once the photos are safely in your tablet you can disconnect the hub and reconnect the power supply to the tablet. 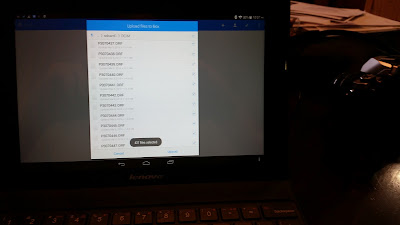 Performance, while not spectacular, is better than I expected.  This is NOT the equivalent of a PC connected to a wireless LAN, but I do believe it is an acceptable compromise for those times when I am travelling.

I downloaded 431 mostly orf files that combined, totaled 6.3 gig.  Individual photos ranged in size between 12 and 20 mb in size.  The transfer time to to the tablet from the SD card was 40 minutes long, the power remaining in my tablet's battery went from a 100% charge to roughly 89% in that time.  The screen did black out during that time, but that did not stop the transfer.

The upload of the 431 images to Box.com took around 50 minutes.  There was no need to track battery power usage, since at that point I had placed the tablet on the external power supply.

I found that I prefer Box.com to the Amazon Photos, or Google environments for uploading to online storage.  The upload speed wasn't really any faster, but both Amazon and Google required that I manually select each and every file individually, while Box.com allowed me to select ALL the photos in the folder.  In a batch of 300 - 400 photos, this is a significant savings in time overall.

Photo Mate has a benchmark utility to assess your particular tablet and make set up suggestions for Photo Mate.  However I found the results confusing.  The scores delivered in text format don't seem to correlate to the graph that comes with it.  The text results indicate my tablet is one of the slowest tablets ever.  But the chart sort of indicates it is the fastest.  I suspect the chart needs updating.  At the very least it needs to be reviewed for clarity and ease of understanding.

The utility recommended that I set Photo Mate's preview quality to low, and the raw decoder quality to fast (bilinear).  I tried all those sort of settings, but I saw no difference in my response time.  I suspect I could use a better set of tablet specs!

So, what's the verdict for me?  I think I'm going to continue using my tablet for this purpose,  I like being able to upload my files to Box so I can clear my SD card for the next day's shooting (If I can find the time for more shooting, that is!).  And I REALLY like not having to carry a laptop around with me.

Yeah, it's slow, but I can schedule the tasks for during the night or other down time, so I don't have to be around or awake when it is happening.