Any more, most photographic software offers a bewildering array of options for almost every function available.  Some of these functions we use rarely, or not at all.  Others, we use on a daily basis.

For me, one feature I use on virtually EVERY photo is resize.  I don't print much any more, and I never print anything that wouldn't fit comfortably on the typical home wall.  So the resize option of 'Enlarge' isn't something I care that much about.  The default output of my m43s camera, the E-M10, handles those print sizes quite readily.

However, I DO post to the internet photo sharing sites like Flickr & Google, and the photo technology sites like Digital Photography Review.  I have a continual need to downsize my photos for easy upload, and to not cause a display bottleneck when people want to view my photos.

So resizing to a smaller image size is something I do quite a bit.  And my current favorite software, ACDSee Ultimate 8 (and ACDSee Pro 8 and ACDSee 18) offers no less than eight (8 !!!) resampling methods.


They are, in the order listed by ACDSee:

The default resampling method appears to be Lanczos.

ACDSee also offers some good advice for resampling in the ACDSee Ultimate 8 Help file.
I began to wonder, is the default sampling method of Lanczos any good?  Why is it the default? What do the other methods do?  And are there times when I should be using something else?  So I did some research and some testing both with down sizing and with up sizing.

It turns out this is not the simple 'try them all' and pick one sort of test.  My research led to an enormous number of scholarly works complete with mathematical formulae and other 'thinky' stuff.  Image resizing will remain bewildering, I'm afraid!

I tried to cherry pick the stuff that seemed relevant to some dumb-ass photographer,  and when I boiled it down, my descriptions seemed to look pretty much like the descriptions found in the ACDSee help file.  So to save my typing I'll just show you a screen print of that section in the help file. 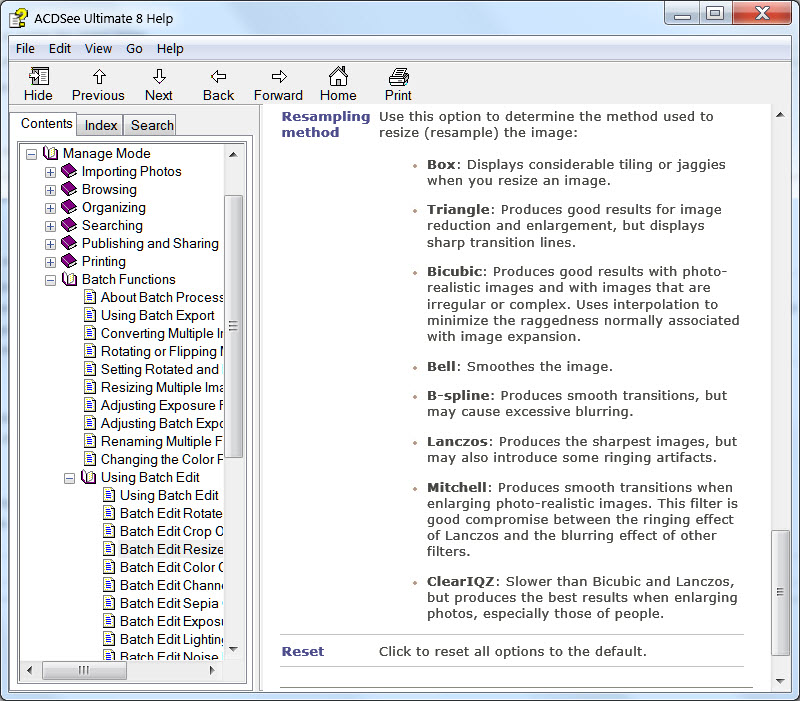 However, there are some interesting notes that ACDSee didn't put in there.  I'll list them for you.


Edit added 4/8/2015 to clarify sizing terminology: On my first test, I used a slightly noisy, available light photo.I reduced the image to 66%.

It might be a good time to take note of ACDSee's resizing terminology.  When I select a percentage that I want to reduce the image size TO, for example, 66%, I am saying that the new image size should be 66% of the size of the original.  I am not saying that I should reduce the image size BY 66%.   This means a 66% reduction in size will be larger than than a 33% reduction in size.  Conversely, an enlargement to 133% results in a smaller image than an enlargement to 166%.  At times, I have found it easy to confuse even myself as to what I have told ACDSee to do. End of Edit

Below, is a comparison of the 3 methods I judged the best reduction results: 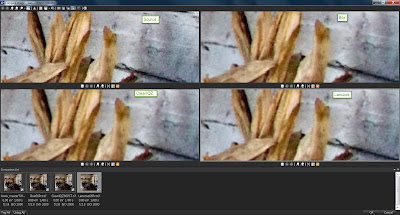 It may not be clear at the small size of this photo, but I judged the Box sampling method to have yielded the best reduction results, over all.  My reasoning was, while all the methods resulted in some blurring, I felt Box did the best at retaining the 'flavor' of the noise pattern and that resulted in a slightly greater illusion of detail.

However, this is not to say that Box is the clear winner.  I wondered if a more conventionally exposed image would yield the same results. So I selected a close up image taken outside in bright sunlight.  I figured this would help determine just how good detail is retained in a photo and would help with judging any color shift that might occur.

The good news is, that none of the methods resulted in significant color shift, though the better results tended to add more contrast to the image, which can shift our perception of a difference in color.

Below is a screen shot comparing the 3 reduction methods I judged the best. These are also reduced to 66%. 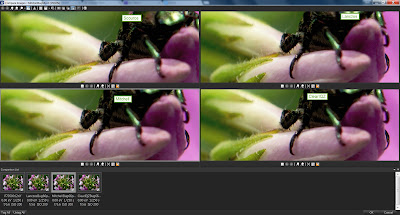 Here, I felt Lanczos did the best, though the differences in quality of the three are minimal.  Mitchell was probably closest in terms of color rendition, but I felt the slight added contrast to the Lanczos version tipped the detail retention to Lanczos (but just barely).  None of them are "bad" though.  If your photo requires a bit more color accuracy, you might want to consider Mitchell.  I felt ClearIQZ did a fine job but didn't really do any better than Lanczos.


But What About Enlarging?

In spite of the fact that I rarely NEED enlarging, and that ACDSee doesn't even recommend enlarging photos, I found this to be a most interesting part of this issue.  I note that my research indicates that Mitchell and ClearIQZ should be particularly good at enlarging an image. This time I enlarged the bug photo to 166%.  I saw no value in trying to enlarge an inherently noisy available light photo.  It seems like needless cruelty to such an image to me!

This time, ClearIQZ and Mitchell DID have the advantage, I think. 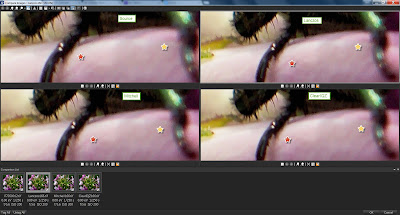 Mitchell did the best in color rendition, but I felt ClearIQZ did a better job with detail.  Plus, if you look at the areas near the stars I embedded in the photos, you will see a slight posterization in Lanczos and Mitchell.  Clear IQZ has smoothed out that posterization even compared to the source tif file.  Normally you wouldn't want that sort of change in a photo, but if you are printing BIG, that might be an issue for you.  Color could be adjusted after enlargement if you need perfection in a big print.

First off, my research indicates that the people who develop graphics programs are WAY smarter than we think!  This is some serious intellectual stuff they are dealing with.  I think I found the dividing line between the concepts of 'clever' and 'smart'.

ACDSee's decision to make Lanczos the default option in their resizing function makes sense to me.  A newbie will get a reasonably well resized photo without having to worry about a spectacular failure.  BUT, a more experienced user might well decide to use something else depending on intended use.  I was particularly impressed with the enlarging capabilities of Mitchell and ClearIQZ.  And I was surprised that the older Box sampling method did so well with the grainy available light image.

ACDSee's caution against resizing seems like it came from another era.  The quality of the enlarged photos seemed pretty darned good to me.  Even the weakest ones, while a bit blurry, seemed . . . not awful.  (But I didn't actually print any of these, to be fair).

For casual resizing to some websites, I will likely use Lanczos.  It's good enough, and so easy to use in ACDSee Products.  But I'm pretty sure I will start to consider Box, Mitchell, and ClearIQZ for critical situations.
Posted by Glen BArrington at 1/31/2015 12:24:00 PM