I recently saw an Older video comparing the default output of  Olympus Viewer 2 to Lightroom 4.

In it, the poster, came to the conclusion that OV2 should be used for initial raw conversion, then export a tiff file for import into Lr4.  While the default output of OV2 came closer to what a finished jpg would look like,

But I was curious about the newest OV version of OV3 (Which comes with every new Oly camera, BTW).  For the last 2 years or so, I have been using ACDSee Pro, and now am using ACDSee Ultimate 8, which I like very much for orf files.

So I decided to compare OV3 to ACDSee Ultimate 8.  Note that this information applies to ACDSee Pro 8, as well.  Compared to OV2 and Lr 4, the differences are MUCH closer to each other than OV2 and Lr4.  I made the default versions exported them to tif files and then compared them side by side in ACDSee Ultimate 8.  OV3 has this same 'side by side' feature, I could have used it, but I know ACDSee better and selected it by default. 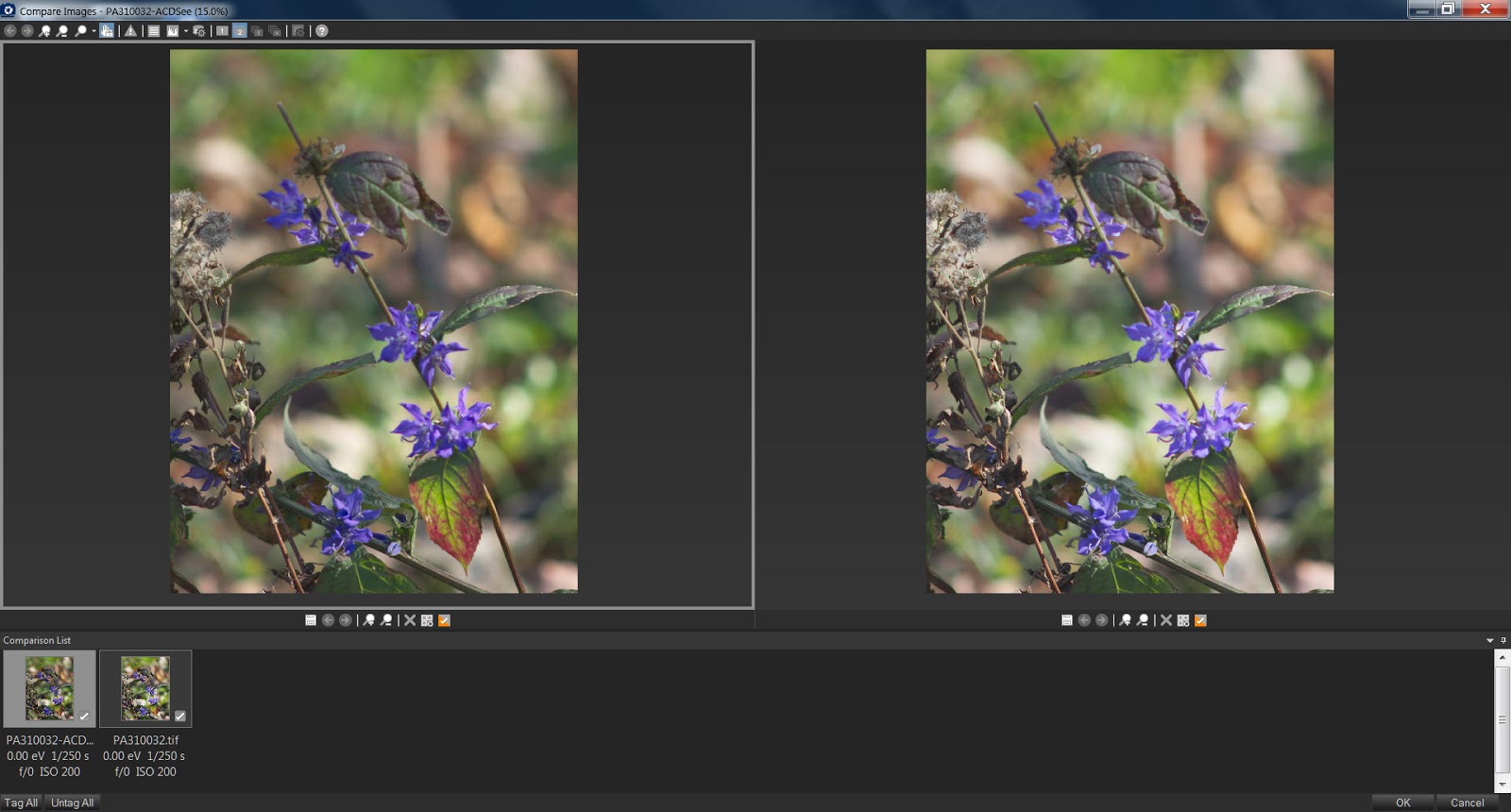 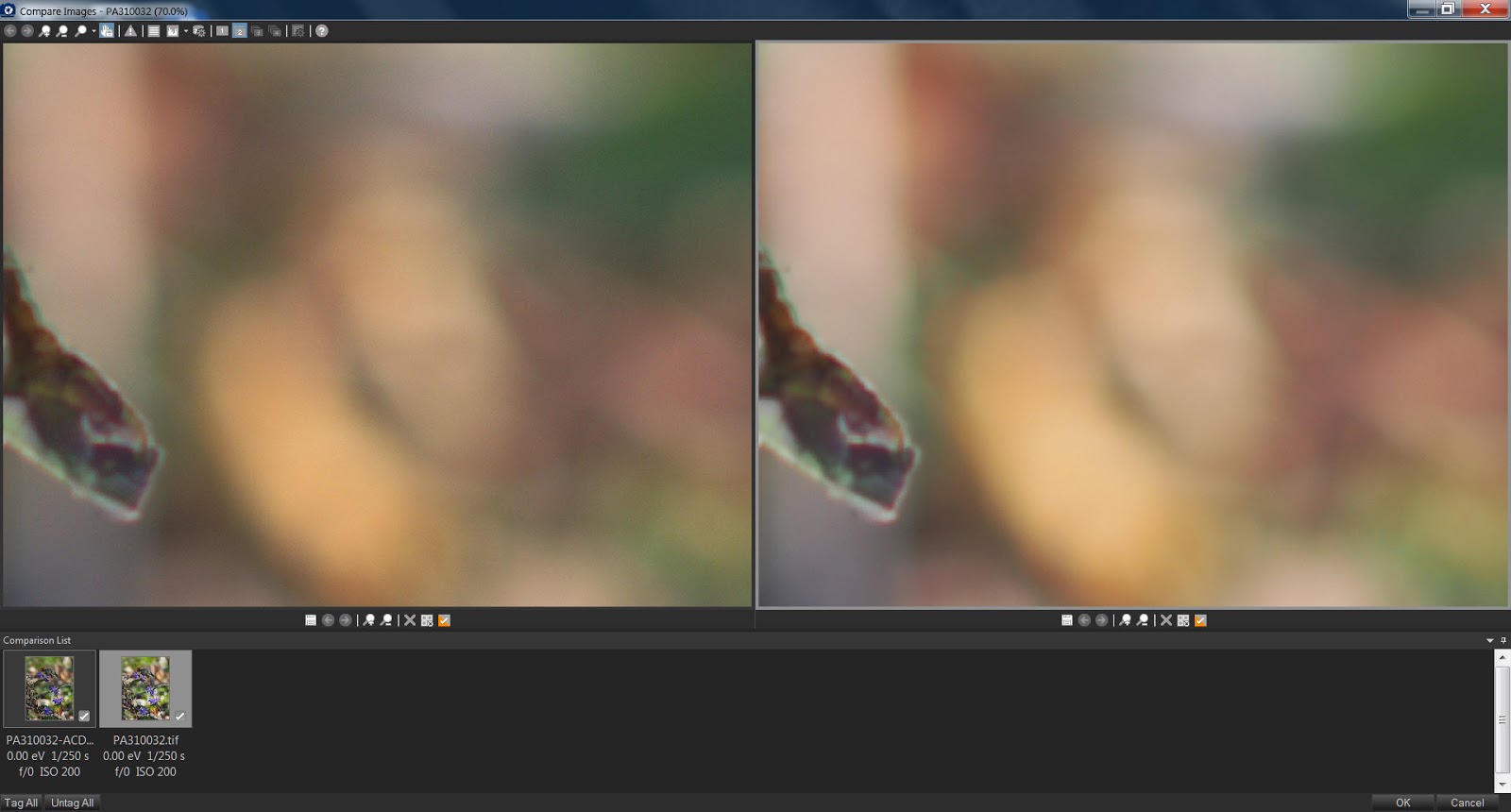 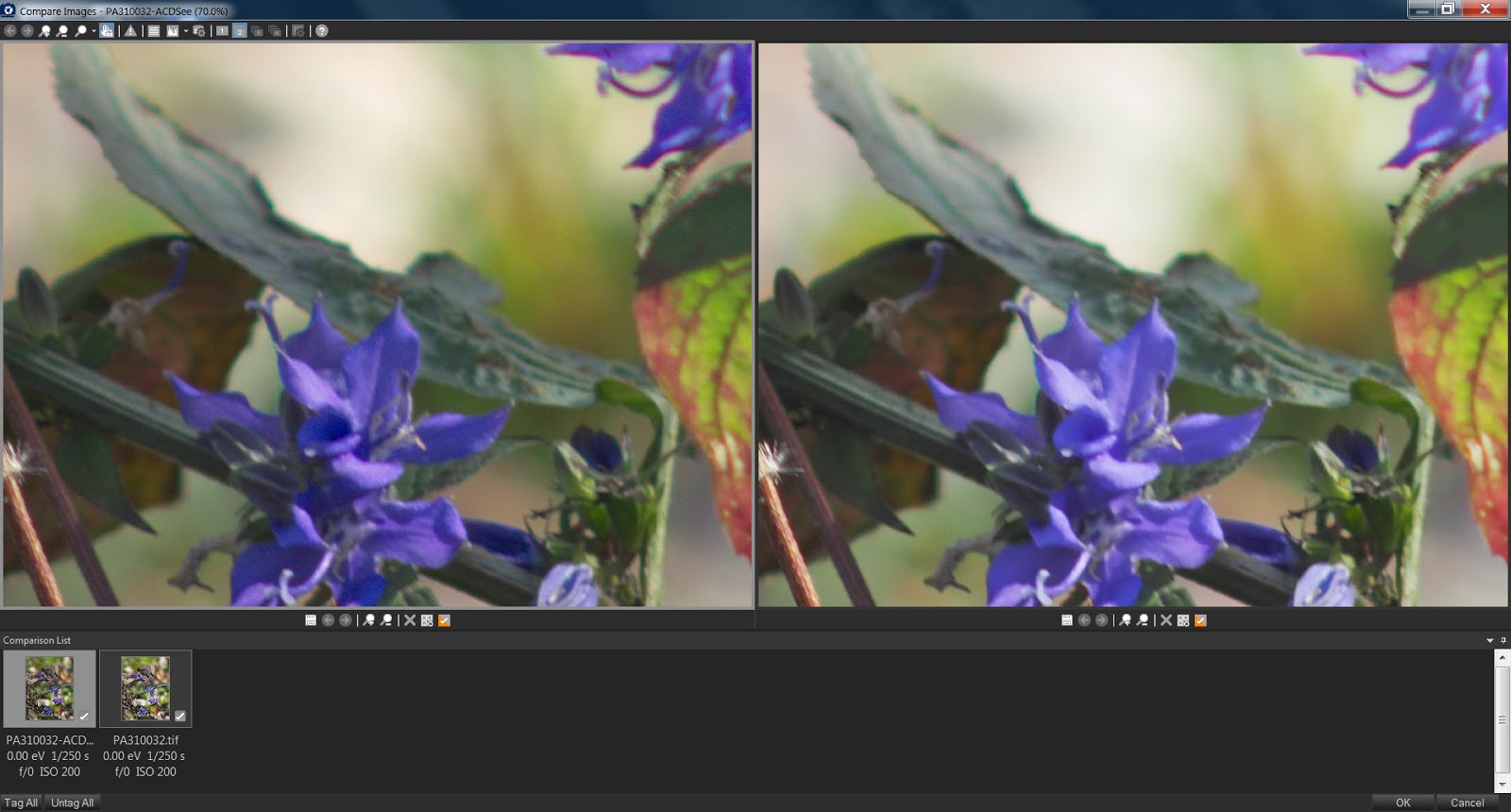 Above, there is greater highlight detail in the ACDSee version than there is in the OV3 version.  There is nothing "wrong" with the OV3 version, it's just that it has made certain assumptions about what you want in the final image that you might have to undo if you are using OV3.  ACDSee offers a bit more of a blank slate, I think. 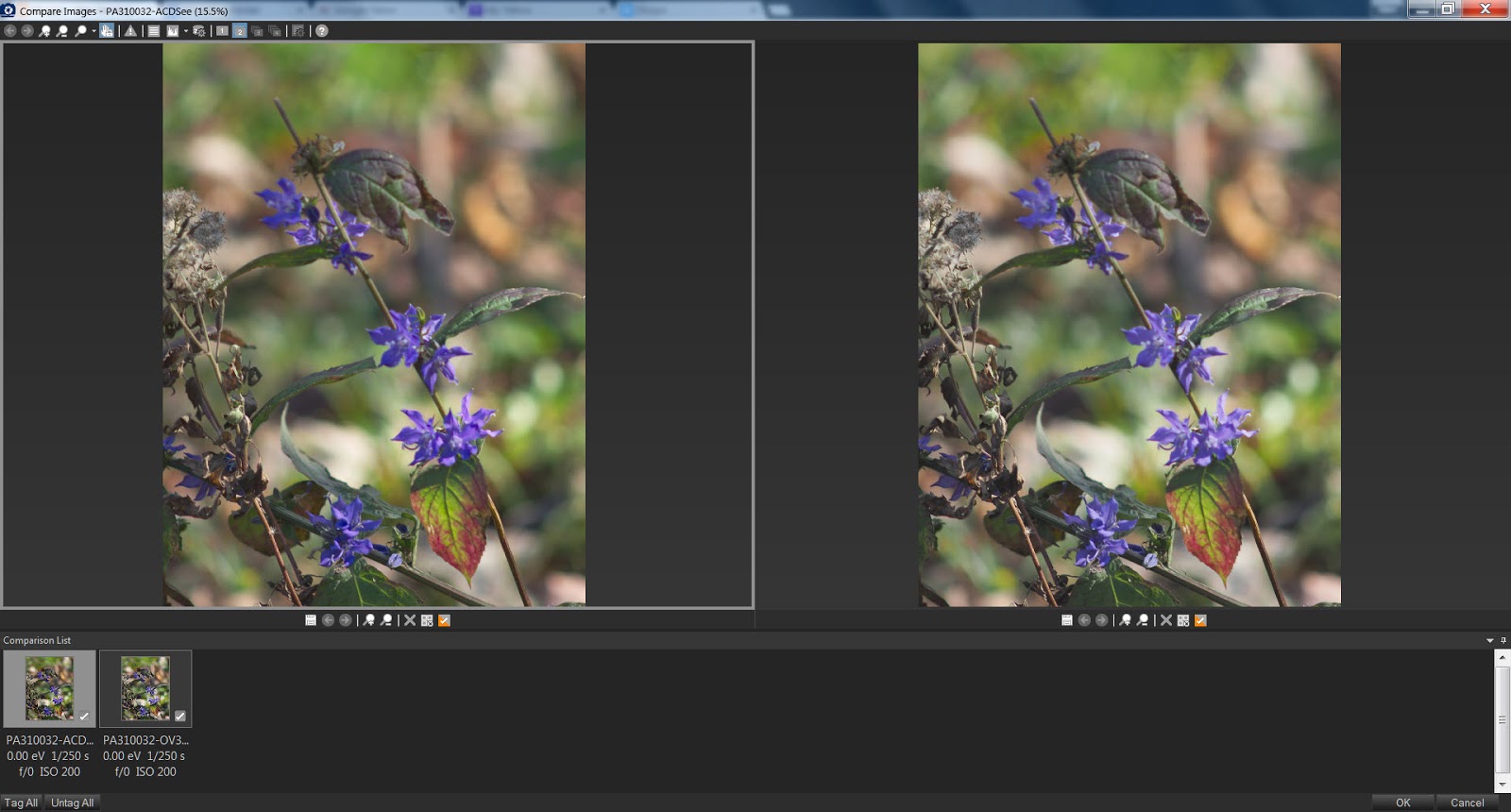 Above, I 'cheated' a bit, and selected something other than the 'default' values for OV3.  Instead I changed the "Picture Mode" in OV3 from "As Shot" to "Natural".  This brings the OV3 version much closer to what ACDSee offers as the default version. 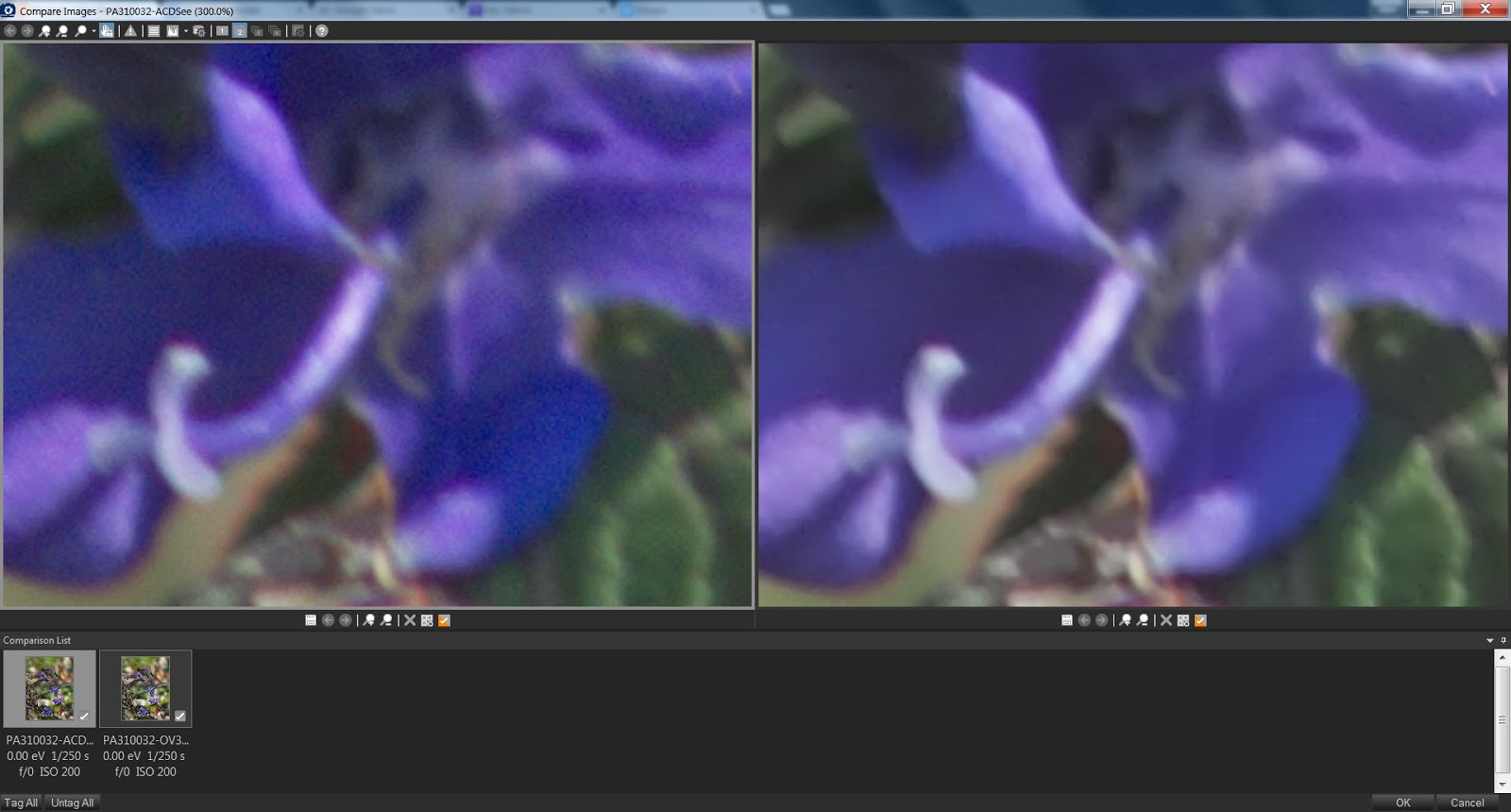 Above, however, OV3 still seems to add a bit more contrast and NR to the image than ACDSee does.

I think you already know what I think.  I prefer the ACDSee version as a starting point for further editing.  On the OTHER hand, for those situations where the default values are 'good enough'  OV3 is more than adequate.  Although I would ask you why didn't you just shoot jpgs in the first place!  That will give you the same thing!

As far as flexibility and power goes, I think ACDSee Ultimate 8 has it all over OV3.  I found OV3's user interface 'reasonably' easy to figure out, but I found the controls kind of 'jumpy'.  In other words, I could make BIG changes with the controls pretty easily; but once I had to start worrying about small changes and moving the controls in small, controlled increments, OV3 became very difficult to use.  If you need fine control, I don't think you will be all that happy with OV3.

That being said, OV3 is a rather good product, especially since you get it for the cost of an Olympus camera.  If you are careful, you can do very good work with it.  But I think most people will prefer to eventually move on to something else.