Do You Need HDR for Natural Looking Photos? 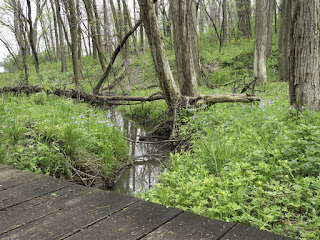 As I wrote earlier, I recently purchased Photomatix Pro 5  HDR software.  And I am experimenting with it, trying to figure out when and how I might want to use it.  So I've been shooting a lot of  3 and 5 shot exposure sequences, trying to get a 'feel' for Photomatix.  (let's just call it PM, for now!)

I've been pretty happy with it, overall,  I found that I CAN get natural looking photos from properly exposed photo sequences.  However, I began to wonder if I'm actually gaining or losing anything by using PM compared to using a well exposed raw shot and developing it conventionally via ACDSee Ultimate 9.  So I set out to figure out a way to test the two programs out.

My methodology was as follows:

What I learned from this experiment, is that the answers can't lead us to a clear winner,  It's going to settle out to a matter of taste and skill, I think.

The HDR Image, Below:
note: As always, click on any photo to see it displayed larger. 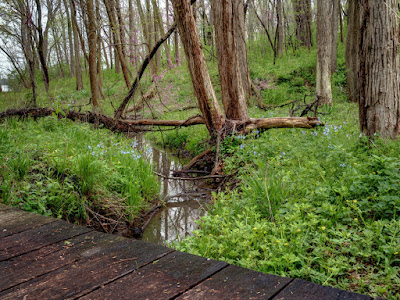 This was clearly the easiest photo of the two to produce, and I was quite satisfied with how it looked straight away.  The detail and tone of the photo is very good, and, I think, it reflects how the scene looked to my memory.  As a reminder, I did use NIK Viveza 2 to lighten the detail in the shadows of the fallen logs a bit,  to darken and add contrast to the footbridge, along with lightening the water level roots of the tree in the center.

The ACDSee Only Image, Below: 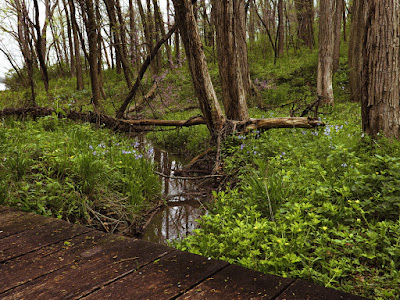 Frankly, I like this photo overall, just a bit better.  While not quite as 'perfect' as the HDR photo, I think it more accurately reflects the . . . "emotional content" of the scene better than the HDR version.  However, it was MUCH more difficult to produce.  Instead of a simple 4 step process to get a completed photo, I had to resort to a somewhat complex 8 step process to get the photo to where I wanted it to be, that included multiple passes with Pixel targeting, and development brushes.   I could have cheated and used NIK Viveza 2, but I wanted to see what an all ACDSee version would look like.

I always thought ACDSee's selective editing was pretty good compared to the competition, and I think, for the most part, it is.  However, if ACDSee could invent a way to handle multiple pixel targeting, ahh, targets in one pass, the way they do with the development brushes, I think they could be VERY competitive in the selective editing department.

Out of curiosity, I did try to subsequently 'fix' the HDR version to better reflect my preferences however that added another 6 or so steps to the process, and I never did really capture the 'feel' of the ACDSee version. I suspect as I gain more experience with Photomatix, the quality of my HDR photos will improve as well.

Let's first look at an area that HDR excels at, problematic exposures. 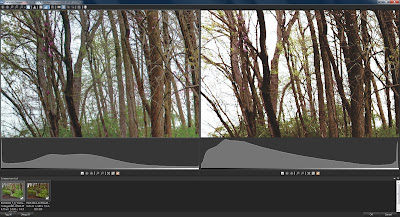 Above: The HDR version is on your left.  As you can see, HDR does an excellent job of capturing detail out of the problem photo areas.  The branches of the trees against the cloudy sky are more numerous and more pleasant to look at. 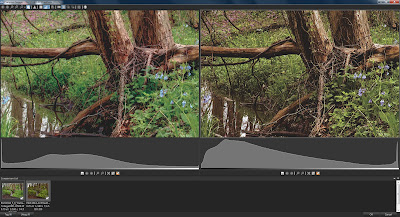 Here, above: I found that ACDSee's Light EQ did a better job of pulling out detail in the shadows of the water level roots than Viveza did.  Though Viveza did a pretty decent job of it, I think, the HDR version might not have provided all the detail Viveza needed.. 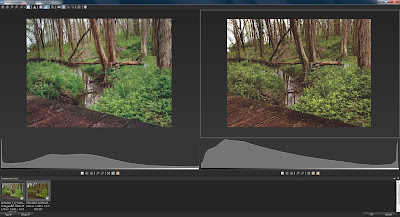 Above: is once again a comparison of the two images, side by side this time.  While both appear quite natural, I believe the ACDSee only version seems not only to adhere to the emotional spirit of the scene as I saw it, but I believe in the HDR version, the brightness relationship of the standing trees in relationship to the overall scene seems a little out of balance. That might be a personal taste decision though.

I DO wish however that I could have captured a bit more of the detail those trees that were silhouetted against the sky in the ACDSee version compared to the HDR version, but the compromise I made in that regard is something I can live with.

All in all, I don't think there is a huge benefit to using HDR for natural looking photos unless I am facing a challenging lighting situation.  In which case, It costs nothing to fire off a 3 or 5 exposure photos sequence to get insurance that I have adequately captured the scene.

I didn't illustrate it here, but HDR's don't really work well with even slow speed action shots.  The Ghosting, (where the faint images unique to each shot can bleed through enough to the final composit image that not even the strongest anti ghosting measures can remediate.