How to Get KILLER B&W Conversions with ACDSee

One of the great mysteries of digital photography, to me, at least, is the popularity of special Black and White conversion software.  On the surface, it would seem to be one of the least needed categories of software, yet its popularity as a category is perennial, and many people have clear favorites and argue endlessly on various forum sites as to which particular B&W conversion software is better.

Regardless of the software used, really GOOD B&W conversions can be done with just about ANY Editing tool, Workflow tool, or DAM tool on the market.  All it really takes is about 5 minutes for an internet search on B&W conversions for your software, and reading 2 or 3 tutorials on the subject.  Of course you will need to practice, but with any competent specialty tool, you'll still need to practice anyway, unless you are content to mindlessly accept whatever a filter throws at you.

This article is about doing B&W conversions with ACDSee Pro, and ACDSee Ultimate from within the Develop Tab. (i.e., Non destructive development.)  As opposed to the Destructive method found in the ACDSee Edit tab and in most editors like Photoshop, and Paintshop Pro.

I will not cover destructive B&W conversions in this article, mainly because I prefer non destructive methods, and it is what I use on a daily basis.

What Makes a Good candidate for a B&W Conversion?

Clearly, the first task in a good Black and White conversion is selecting a photo to convert!  In my experience, the best candidates for B&W conversion have the following characteristics:


That last point is a lot harder to explain than the first two.  Such a photo might not have either of the first two points, but you, as the photographer, suspect that there are hidden layers of  meaning and emotion buried in the image, and that a good B&W conversion might expose them.  I think the demonstration photo I've used for this tutorial is a good example of this.  In its color format, it is an interesting experiment in color and shapes.  But In black and white, I think it transforms into an illustration of hard work and sweat, with just a hint of mud.  A lot of that context is lost when you have the color competing for your attention.  It's not as pretty as a black and white photo when compared to color, but I think it is a bit more powerful as an image. 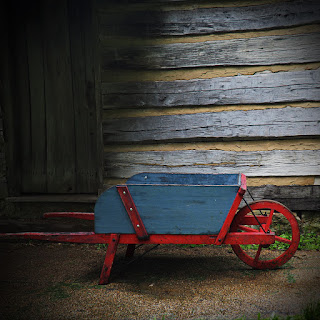 Consider this photo displayed, to the right (click on any photo to see a bigger version):

I have selected a 'done' tif file for my B&W conversion even though I intend to use the Development tab, which is normally viewed as 'The Raw Development Tab'.  Which it is.

But, the Development tab can be used on any non layered photo, not just raw.  It will perform bit mapped like edits on bit mapped files like tif and jpg photos.  The only difference is, instead of actually editing the photo itself, it saves the changes to the "sidecar" file and applies those changes to the photo whenever that 'developed' image is displayed in ACDSee.

This is a good thing for me, and I think, for you, in that experimental and extra editing like B&W conversions can frequently be completed without using any sort of destructive editing.  This is an additional reason to use ACDSee Pro or Ultimate rather than a B&W conversion utility, since I have never seen one that claims to be anything but a destructive editing process.

This is how the image looks when I bring it into the ACDSee Develop Tab: 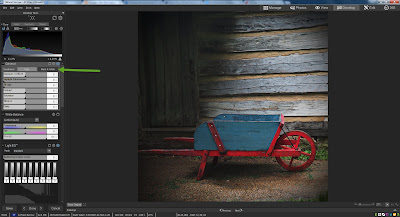 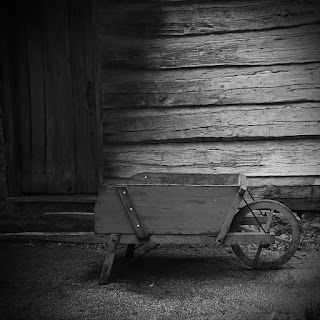 But let's go back to the desaturated image.  Note that it is a pretty bland conversion.  Straight desaturation doesn't take the tonality into consideration at all.  If a blue object and a red object reflect the same amount of light, they have roughly the same tone in a desaturated image.  Note that how the red frame of the wheelbarrow, and the blue box of the wheelbarrow seem very similar in tone even though the color version of the photo displays them very differently.

Clearly, we need to do something more to this photo for it to achieve what I think it is capable of.

There are three things I don't like about this photo. First, as stated before, the red and blue colors are displayed as almost identical shades of gray, turning the wheelbarrow into a very boring object.  Secondly, the image is too flat overall. And thirdly, the wheelbarrow simply doesn't stand out from the background to the point that it is the subject of the photo.

Set the black and white point via Tone Curves.

Many people find this intimidating, but all this step does is define the point that says, "Beyond this point on the grayscale, everything should be pure black", or "pure white".

To be honest, there is no great secret in doing this.  It is entirely a guessing game on your part based on your tastes, judgement, and experience.  There is no rule of thumb and it will vary from photo to photo.

In this case, I ignored the Midtone point, but I could have adjusted it as well.  Mid tones are represented by the yellow line.  If you change the mid tone, say to the left,  what occurs is that the distance from the mid point to the black point is shortened and the distance from the mid point to the white point is lengthened.  And where the yellow line intersects with the White line moves UP, forcing the lighter tones to brighten even more,  In this case, I think it flattens the image rather than forcing the wheel barrow to be the dominant object.  However I can see that maybe the dark tones could be moderated a bit.

I won't go into great detail on this step since I have written an in depth article on Light EQ, HERE.  It is, without a doubt, one of the single most important tools found in ACDSee Pro or ACDSee Ultimate.

The Light EQ control divides the photo up into between 2 to 9 separate lighting bands with separate light and dark controls for each band.  I normally leave it set to 9 bands unless I have a strong reason to use less. 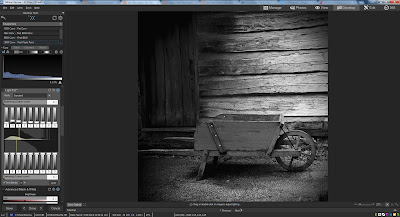 Now THIS image moderates the Too Somber tone with the Too Happy tone, and finds a good median I think. Note that if you look at the sliders, only the darkest areas are moderated.  However we still have no tonal separation between the red and blue sections of the photo.

What the Advanced Black and White control does is allow you to adjust the tones in a photo based not on their relative brightness or on their black and white control points, but on the colors found in the photo. 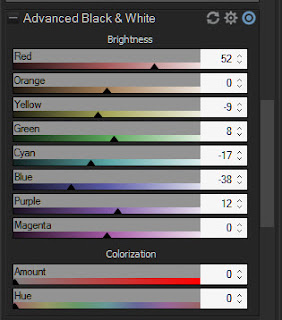 I could have done just that and met the goals I had for the photo.  But I don't think it would have been "Done" by any stretch of the imagination.

No object is ever just one color.  Most things are a mix of several colors, either from impurities in the color of the paint or dye, or from reflections from objects that are physically close to the object whose tonality you are trying to control.  By working through the other colors.and adjusting their sliders experimentally, you will learn exactly how the colors interact with each other.  And I recommend that you do this for many years until you are a grizzled B&W professional who simply can't learn anything else about this subject, or until you die, whichever comes first.

For this photo I found that adjusting the colors that were close to red and blue seemed to affect the photo's tonality for the better.  I particularly found that darkening Cyan added an extra bit of 'grittiness', from stains and water marks, that kept the blue from being perceived as some sort of 'circus color'. 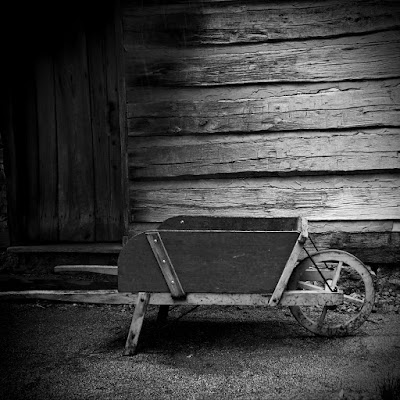 That's pretty much it. Unfortunately, describing the process takes far longer than actually doing it.  As a result, I fear this article makes B&W conversion seem too difficult to do quickly and easily.  But in truth, I had produced this image in about 1.5 to 2 minutes.  Finding the perfect image to use as an example took FAR longer!

However, I DO think I've made my point that you don't need to buy expensive add-on tools to get good Black and White conversions.  In fact, I don't think any of the add-on tools could have done as well.  They might have come close, but they would have needed further tweaking, whereas using your native toolset allows you to get exactly what you want with usually less work and certainly taking no more time than when using an external tool.